The form #43 does not exist or it is not published.

The Atlantic Institute recently enjoyed a special film screening of Love is a Verb, a moving documentary that examines the life of Fethullah Gulen and the Hizmet Movement. We would like to thank our hosts, First Baptist of Greenville, our guest speakers, and all those in attendance for a lovely afternoon.

Our guest speakers had firsthand experience with the Hizmet Movement as well as being affected by the current persecution of Turkish people. The insights they shared helped form the context that allowed the film to resonate on a deeper level with those in attendance. Being able to walk away from this screening with a greater understanding of the subject matter elevated the experience, and we are grateful for the opportunity to share this film and its story with our friends.

If you missed this screening, don’t worry! Love is a Verb will return to the Upstate soon! Check back at our website often for screenings.

Come experience the Taste of Aloha with food and a fun craft.
November 3rd between 6pm-7pm
Venue: 909 Shull Street  West Columbia, SC
Taste of Aloha - demonstration of peeling pineapples "the island way" and flavoring with Li Hing.  A delicious island favorite that is both healthy and fun!  Together with a few other samplings of island treats, we will also share how to make "Plantation Iced Tea" - a thirst quenching and delightful beverage islanders love to share under the swaying palm trees while they remain cool in wonderful trade winds.
Oiwi Hawaiʻi - a super fun way of learning how Hawaiians of old made their own carved bamboo and then mixed dyes from plant life and stamped their tapa (a fabric made of mulberry bark).  Clothing, bed linens, and many decorative items were adorned with this precious artwork.  We will share real ohe kapala (bamboo stamps), and together we will produce some commemorative, frameable artwork that you can take home.  We will even provide you with your Hawaiian name so that can be added to your artwork! 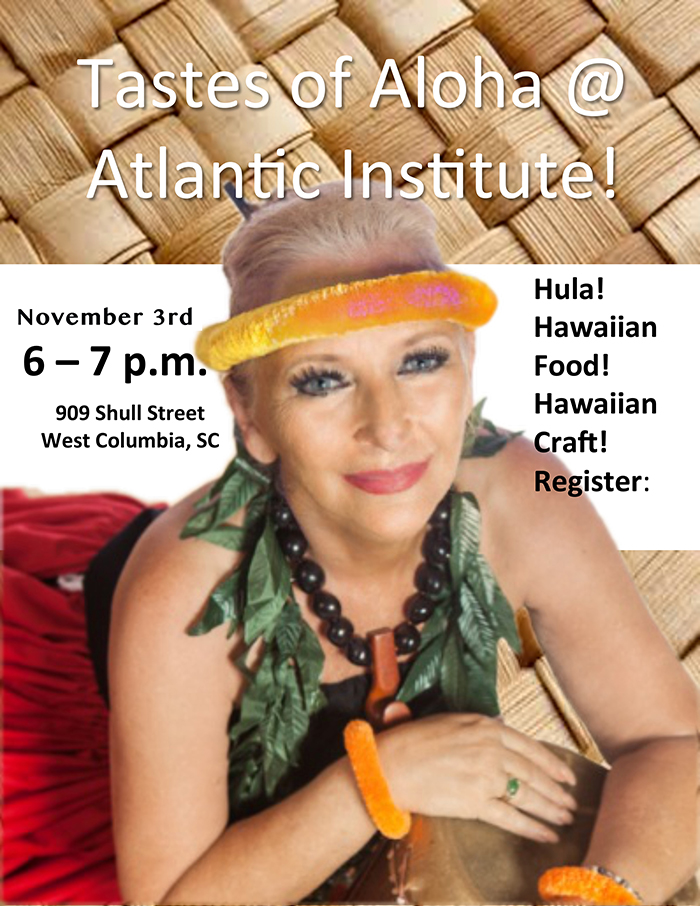 On the night of July 29th, professors, students, and many more gathered at the Atlantic Institute’s office in Greenville to discuss the current political climate of Turkey. The discussion was centered around the recent coup attempt on July 15th, which has created immense conflict and insecurity throughout the country. Mr. Akif Aydin, President of the Atlantic Institute, gave a presentation on his extensive knowledge regarding the situation, and what followed was a Q&A session for attendees. The dialogue largely focused on the underlying issues with the political situation in Turkey – including the history of military coups in the country as well as how the current situation poses a threat to specific groups. The Atlantic Institute is very appreciative of everyone who participated and we hope to continue in this political dialogue of the situation.

Our January Dialogue Night program titled “Trends” was held in West Columbia Office on January 20, 2016. While the dinner was being served, our guests were invited to think outside the box as we prompted them with phrases that they may not thought of as being trendy!

Our dialogue night was enjoyed with good food, good company and good discussions.

Again, we hope to host more events like this in the coming months as we had such a wonderful time. Please keep checking our website for updates about upcoming events!

Dr H. Paul Thompson from NGU was the moderator and opened with a funny story of how the cultures differ even throughout our own country from North to South and East to West. Then each panelist was asked to recall a story of perhaps a cultural misunderstanding that they've encountered here and had the audience in an uproar of laughter. After this the questions kept coming and the panelists were very good at painting the picture for you of what it's like to be cross cultural living in America.

Germany: Dr Dirk Schlingmann, Dean, College of Arts & Sciences, Professor of Mathematics, University of South Carolina Upstate
Turkey: Tugba Kucukkal is a postdoctoral researcher in the Department of Physics and Astronomy at Clemson University.
French: Monique Glass, native of France, raised and educated in Paris, Glasgow, Scotland and in Pittsburgh, PA.
India: Rashmi Janakiraman is a graduate student in Early Childhood Education at Furman University as well as a degree in computer science and engineering from Madras University.

Afterwards, everyone enjoyed some Baklava, a Turkish dish and Quiche, a French dish, while they mixed and mingled and shared in dialogue with those around them.

On May 15th, the Atlantic Institute hosted a TeaNight on the topic Human Connection and Communication in Social Media: Struggles and Opportunities. It was an evening of thought, tea, and making connections as the groups discussed the changing role of social media in society. First, the attendees enjoyed a brief speech by Gavin Weiser, Assistant Director of Multicultural Student Affairs at the University of South Carolina. He gave everyone something to think about as to the good and the bad in social media's role in society. The attendees were then given the chance to ask questions of Mr. Weiser and through that were able to delve deeper into the topic. After that, everyone got a chance to try some authentic Turkish tea and deserts and discuss the topic in small groups. They discussed the changing role of social media in their lives and how it is effecting their daily relationships. Each group was then given the chance to present what they discussed to the larger group. Everyone came away with a deeper understanding of the role of social media in their lives and the increasingly globalized world.

On Tuesday February 4th the Greenville Office hosted Dr Ron Romine as our speaker for our Dialogue Night. All participants received a handout from Dr Romine, A Brief History of Religion and the Constitution. His handout discussed many of the court cases from 1787 until 2005. There was discussion of how things were written in the Constitution based on what the world was at the time and how today the Supreme Court must decipher what it means in today’s time. The founding fathers would never have imagined our country to be what it is today. All participants took part in a lively discussion afterwards that went on for close to thirty minutes. Most agreed that this was one of the most interesting Dialogue Nights so far.

The Whirling Dervishes of Rumi finished up their South Carolina Performances with their last performance held at Furman University's McAlister Auditorium on March 14th. They performed in Columbia on March 11th and in Charleston on March 13th.

It was a great evening with a great turnout, over 1,200 people attended in three cities, for such a wonderful performance of Sufi Music, Calligraphy and the Whirling Dervishes.

The program started out with a beautiful performance of Sufi Music...
Then the audience was wowed by the onstage performance of My Aydin Cadir's Calligraphy. The beautiful Rumi quotes he made come to life on stage for everyone was a true delight to experience. Many attendees left with pieces of his work for their home.

The Informational Video explaining the Whirling Dervishes shared a behind the scenes understanding of the meaning of their dance, their robes, hats and an in-depth discovery of Rumi and his teachings. Watching the Dervishes perform to the musical movements, each with a distinct rhythm, bring to life Rumi's teachings and way of being right before your eyes. A great reminder to all just to LOVE

Our Columbia and Greenville Centers hosted a Dialogue Night on September 3rd titled Ethics in Cross Cultural Perspective: Turkey and the United States" Both locations had great discussions regarding cultural ethics, etiquette and moral behavior. The audience was able to learn about many of the different cultural customs that are abundant in Turkey such as how to address people, shaking hands, crossing legs, respect for elders and even smoking. The Rev. Dr. John L. (Jan) Setzler from Trinity Lutheran Church in Greenville represented a very well thought out American Perspective of America's melting pot culture and Dr Carl D. Evans, Professor Emeritus of Religious Studies, University of South Carolina was the speaker in Columbia that spoke about Ethics on a larger scale and how it relates to Racism and Poverty amongst other things that are prevalent in American society.

EQUALITY FOR WOMEN, PROSPERITY FOR ALL

An Informative and Inspiring Session with Augusto Lopez-Claros, Former Director of the Global Indicators Group at the World Bank.
Saturday, July 20, 2019 at 2:30 p.m.
Smith Hall at the Governor's School for the Arts and Humanities.
EQUALITY FOR WOMEN
PROSPERITY FOR ALL 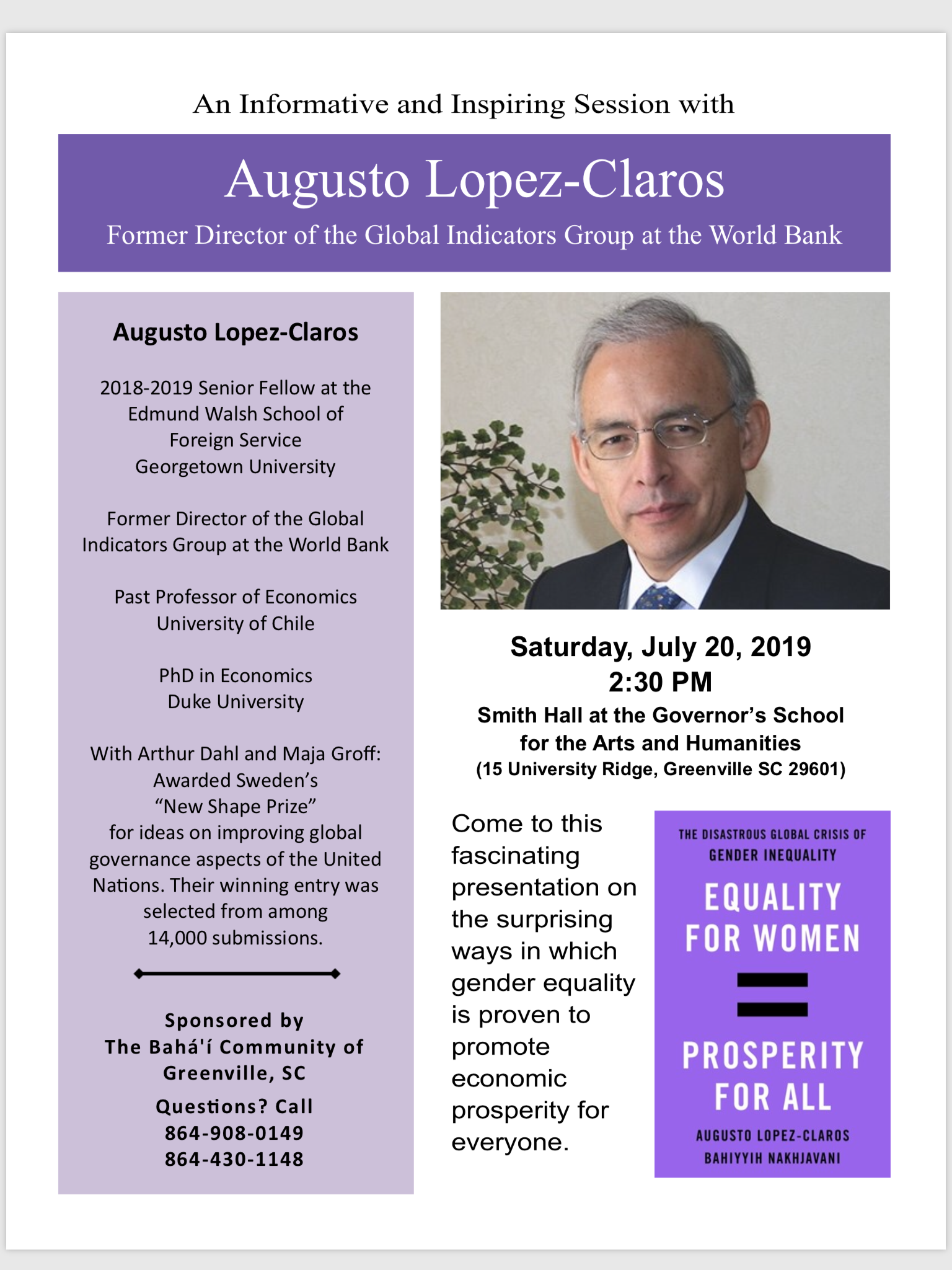