Thank you for your generous donations!

Somalian children are dying from starvation and have been displaced because of the drought. There are more than 400,000 Somalian refugees staying in the Dadaab Camp near Kenya and the number is increasing.

In 2011, Atlantic Institute (formerly South Carolina Dialogue Foundation) has launched a campaign to raise money in order to provide water and nutrition needs in Africa. Our foundation has collected $1,600 funds and donated to the Helping Hands Relief Foundation to deliver it to those who are in need.

The Islamic festival of Eid Al-Adha, or "Festival of Sacrifice," is the second major Muslim festival after Ramadan. Eid Al-Adha falls in the month of Hajj, when Muslims perform Hajj, the pilgrimage to Mecca, Saudi Arabia. During the three days of Eid Al-Adha, those Muslims who can afford to purchase a sacrificial animal, which could be a male ram, goat, sheep, cow or camel. They sacrifice the animal to gain God's pleasure, acknowledging and honoring the Prophet Abraham's [peace be upon him] willingness to submit to God's order in a dream to sacrifice his son, Ishmael [peace be upon him]. God stopped Abraham [peace be upon him] before he actually sacrificed his son.

The meat from the sacrificed animals is prepared using "Halal" practices. "Halal" means "permissible" and is similar in concept to the term "Kosher." Muslims share this meat with neighbors, relatives and friends as a sign of hospitality and caring.

In October, 2014, the Atlantic Institute donated pounds of meat from Eid Al-Adha sacrificial animals to help those in need. The meat was prepared by a butcher using Halal practices and individually packaged for distribution. Atlantic Institute representatives, Clemson University students and area residents personally delivered the packaged meat to families in Pickens County

An earthquake recently killed more than 8,000 people and injured about 14,500 in Nepal. The Intercultural Dialogue Club (IDC) of Clemson University held a fundraiser by preparing Turkish food for lunch at the Clemson University Advanced Materials Research Center with the partnership of Atlantic Institute on May 19th. IDC members prepared vegetarian and chicken dishes and thanks to all the generous people, all of the food was gone within an hour. $725.00 was collected and donated to Embrace Relief's Nepal relief campaign.

The IDC appreciates all the donations and help.

Thank you to all of the generous people. 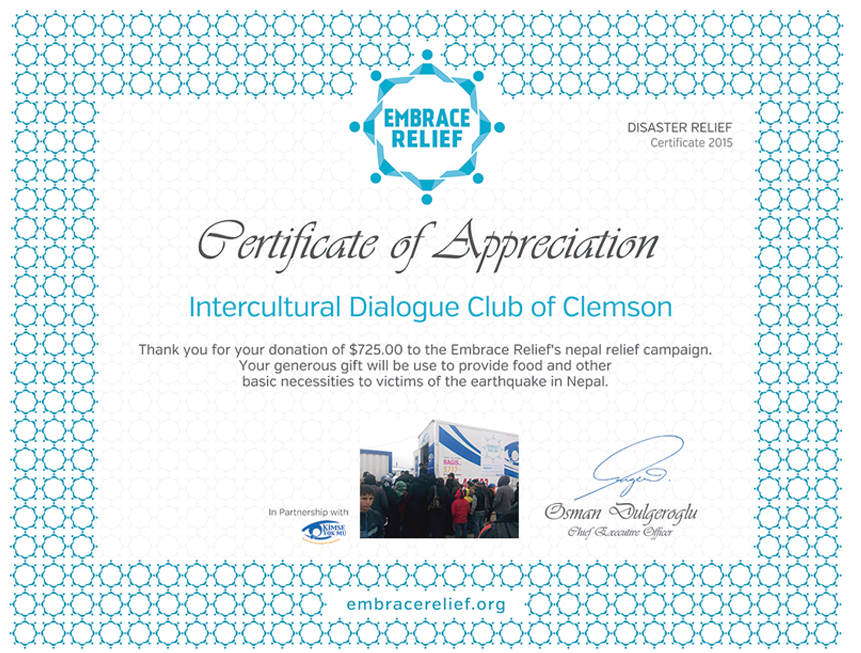