Turkey: Democracy In Peril – And What It Means For The United States.

After that Mr. Harrington gave us a different perspective.

Harrington closed on a somewhat positive note. He talked about what we can do to fix the situation. To improve things here and someday send support back to Turkey.

This dialogue event motivated people to think and encouraged volunteer-ism.

Jim Harrington, a human rights attorney with more than four decades of experience, is founder and director of the Texas Civil Rights Project, a nonprofit foundation that promotes civil rights and economic and racial justice throughout Texas for low-income people. He graduated from the School of Law at the University of Detroit in 1973, from where he also holds a Masters in philosophy. He taught for 27 years at the University of Texas School of Law and continues to teach undergraduate writing courses at the university in civil liberties and history-making trials. Harrington has handled landmark civil rights cases, written and published broadly, and served on human rights delegations in different areas of the world.

On Sept 28th, over 60 people gathered to listen to the panel speak on "Expanding Your Religious Horizons"
A joint effort between Interfaith Forum and Atlantic Institute, this event brought together the minority religions for us to learn from.
We would like to thank our Panelists: Dr Parampal Singh Bhullar, a Sikh who is a palliative care physician with GHS; Cathy Jaggars, a Secular Humanist and retired Marine who is an adjust professor at Greenville Tech; Joel Sprague, a Christian Scientist who leads a research laboratory for TRI/Environmental in Anderson; and Cyn Massey, a Baha'i who heads the Woodruff Library in Spartanburg County.
Each participant spoke about their faith for approximately 10 minutes, then answered questions from the moderator and then questions from the audience.
Everyone thoroughly enjoyed listening and learning throughout the evening.

An Ethnic Stew of cultures of people from all around the world.

The Greenville County Library System together with Atlantic Institute participated in a Cultural Panel Night as an Upstate International Month program. Five different countries(Germany, France, England, India and Turkey) were represented and five very different experiences were heard from.

Coming to America is a very different and unique experience to each individual and listening to the stories of each participant were able to give those in the room a glimpse into this unique experience that many of us born here can't ever imagine. Being able to have a small sampling of some of these other countries food items was also very unique...from English tea, French Desserts and Turkish Delight.

The Greenville Office together with the Greenville County Library System presented an event on the Civil Rights Movement in Greenville.

The evening opened with two students from Southside High Schools Speech and Debate team performing a piece called "Strands" By Eric Wilson. They took us through the timeline of African Americans from the Auction block to the Civil Rights Movement and did an excellent job at capturing the audience.

Then our Panelists took their places and discussed their stories, shared their thoughts and opinions and fielded questions from the audience. We would like to thank Mr Mack Lockhart, Mrs Lillian Brock-Fleming and Mr Jimmy Carter for sharing their history with us so that we can learn from them.

Mr Richard Walton MC'd the event for us and shared with us his experiences as well. This event was well attended and many thoroughly enjoyed the performance and discussion. 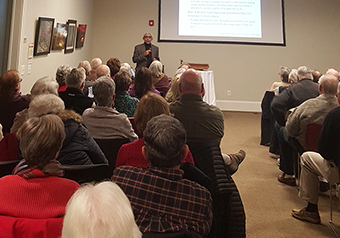 Approximately 50 people from all various backgrounds and ages gathered together to enjoy an hour long storytelling event from three of the areas storytellers. Mr John Lasne, Mr Ray White and Storylady T did a great job of entertaining the audience as they each took turns telling a story from their different backgrounds.

We'd like to thank Greenville Technical College for the use of their TRC Auditorium. It is a great StoryTelling venue.